It was spoken over me like a puncture in my lungs, letting all the air out and causing me to gasp for breath. “I regret marrying you. This was the worst mistake of my life.” We’d been married for three weeks by the first time I heard those words spoken to me and it was far from the last. I was 19 when I first heard that spoken over me: Our marriage was a mistake. I was a mistake.

I was only a teenager, one who still was figuring out what my identity was and more importantly, who was the foundation of my identity and where my identity was rooted. Yet there I stood, amidst trying to sort it all out and suddenly I was being shaken. Vigorously.

Everything I thought I had established of who I was, stood feebly by while being threatened. I was a daughter, a sister, a friend to a melting pot of genres in school, a “good person”, a rule follower, a Christian, an A-student, a fun-loving girl who was playful and adventurous, and had just shortly before, proudly added “wife” to that list. I had a whole lot of security within that list and was feeling pretty comfortable with what I deemed as my identity.

That comfort was quickly being challenged as the one who was the closest to me, the one who was meant to be my protector and fight for me started adding more words than I ever had thought to include in that list: controlling, the crazy one, not as pretty as the girls online, a terrible wife… a mistake.

It wasn’t more than a quick breath after I learned of his unfaithfulness in our marriage, that I started adding more of my own words to the list: fat, ugly, not good enough, undeserving, worthless, a used piece of trash tossed to the side. Just like that, my identity (or what I believed my identity to be) had morphed into something unrecognizable.

As our marriage crumbled and I was left to try to pick up the leftover pieces of my life, I started sorting through that list. Was I really fat and ugly? Was I really the one who was crazy? Was it actually my fault that he was unfaithful to me? And God, God, am I really worthless?! Will anyone else ever want me?! I had heard “worthless” and believed it for so long that I really had begun to accept and project it over my life.

It had so far seeped into my own list of my identity that as I sat in my parents’ back yard that late summer afternoon as our marriage broke, I began to weep as I talked to my mom about where my life was at. As I told her I didn’t want to get divorced because I had always committed to being a faithful wife but simultaneously felt so worthless and that my marriage was so far beyond repair and that there was nothing I could do to help it. I still so distinctly remember the words coming out of my mouth between sobs, dropped heavy as lead from the weight of my despair, “Mom, I feel so helpless, so isolated and so worthless that I don’t know what to do to get out of this mess and don’t know how to make my life better. . . I’ve thought a lot about just taking my own life to end it all.”

Within a couple days of that conversation, I was moved into my parents’ house and my ex-husband and I started the divorce process. In so many late nights sitting alone in the room of my childhood home, crying to God, to my Redeemer, I prayed and asked Him to redeem my identity. “God, what is left of me? Who do you say I am?”

One night, so late that it had now become the wee hours of the morning, I cried out, pleading, “God! Show me I have worth!” I so desperately needed God to repair the broken identity that had for so long been spoken over me and that I had started to believe about myself. I reached over to grab the Bible nearest to me, which was The Message (paraphrased version). I flipped it open and looked down. My eyes stopped on Luke 1:28. Right there, right in the dark of the long painful night-turned-morning, my eyes caught this verse. Like the wind being put right back into my lungs and my puncture wound being healed in a moment, my breath filled with life again as I read,

Beautiful inside and out!

God be with you.”

As I read and took those words of life in, I could feel myself begin to heal and transform right there,  as I cried to God to come in and redeem – to remind me of His truth about my identity. 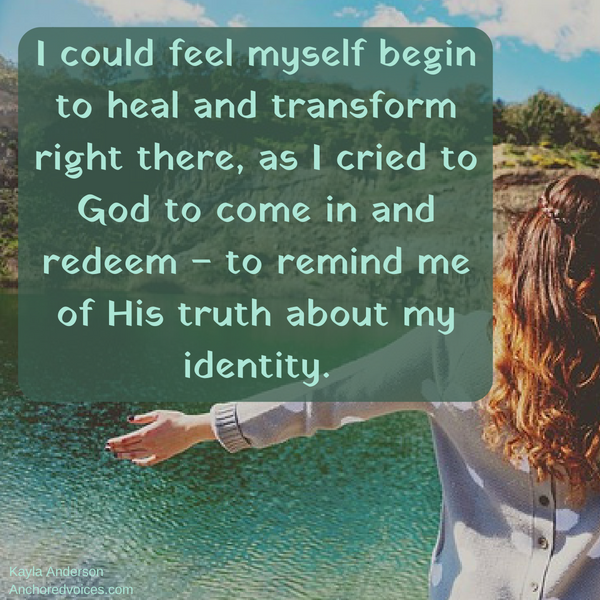 I’m beautiful. Beautiful inside and out. God is with me. I am a child of God. I am full of worth – I’ve been bought with a price. I am secure. I am loved. I am redeemed.

Thank you, Lord, for who you say that I am. Thank you for the secure identity found in you.

Kayla Anderson is married (for better or for worse) to the one who she knows without a doubt that God created her to be companions with.  Together they have four young children, Ezekiel, Asher, Ellery, and Alder, and run a hand-crafted soap shop.  She is a stay-at-home, homeschooling mom and is in a season of learning how to gracefully be the central point and glue of their family.  Thank the Lord that she has Him to look to for wisdom, guidance, and strength!  She loves reading in the quiet, early morning hours, decorating their sweet little home, writing has been part of her soul since she learned how to write letters, and her love of coffee runs deeper than her coffee pot.  You can find more from Kayla on her blog or Instagram.