I had the perfect recipe brewing for letting bitterness take root, for letting it fester, consume me by taking over my thoughts, and even for seeking revenge. I believe most people wouldn’t have blamed me if I had taken any one or all of those actions. After all, I did have a husband who had been unfaithful to me.

A husband who had, not just once, but repeatedly for nearly the entire length of our two-year marriage chosen other women over me. People would have understood my anger. My bitterness. My unforgiveness of “the big one” in marriage. 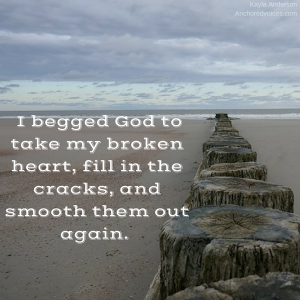 Thankfully, before I knew what was to be in the coming days, the Lord knew the path my life would take and only three weeks into marriage, He led me to sneak into the back row of the church my dad was a youth pastor at while he was speaking to a group of teenagers. Dad’s message for that night about all about forgiveness. He shared a story about a friend he had who repeatedly hurt him in the same way over and over again. Dad shared that he had learned to forgive ahead of time – anticipating another similar hurt, he prepared in his heart that he would forgive again before it even happened.

I purposed to take that nugget of wisdom and store it. The first time I learned about the unfaithfulness of my ex-husband, I was shaken to my core. I didn’t expect it or anticipate it; I never saw it coming. However, I chose to forgive as my husband wept and repented. And then I recalled what Dad had said – and I decided to box up and store away some forgiveness for any future offenses of this nature.

A few weeks later, I found myself reaching into the forgiveness box again (and all too quickly again and again, and about every 2 or 3 weeks for the remainder of our marriage). This all continued for two years until finally my ex-husband ultimately decided that he really did think his life would just be better off without me in it.

In the aftermath of this all, I had some girlfriends astonished that I would go through this ordeal over and over with him for two years. “Why are you putting up with that!?” “Why are you not just so angry with him?” “Why do you keep forgiving him and giving him more chances when he keeps hurting you like that?” they would ask me.

“Then Peter came to Jesus and asked, ‘Lord, how many times shall I forgive my brother when he sins against me? Up to seven times?’ Jesus answered, ‘ I  tell you, not seven times, but 77 times.” Matthew 18:21-22

Forgiveness does not always mean that you have to stay but it does mean that you have to choose to release all of the emotions binding up your heart and mind. I wasn’t certain of our future but I had chosen to fight for our marriage until the choice was out of my hands and decided by the other person in my marriage. I wanted to choose forgiveness over and over again, regardless of how “foolish” that might lookto the rest of the world. Beth Moore, one of my favorite authors, wrote that “forgiveness may be excruciating for a moment, but anger and bitterness are excruciating for a lifetime.” I wanted wholeness and healing from the pain and sought it with my whole heart, broken as it was. I wanted to be free of the bondage of bitterness or anger that could take root in my life and spread like weeds if I allowed it.

“Keep a sharp eye out for the weeds of bitter discontent. A thistle or two gone to seed can ruin a whole garden in no time.” Hebrews 12:15, The Message

We all battle hurt feelings, being let down, feeling betrayed, humiliated or angry at the hand of another person. However, it’s our choice of how we are going to handle those feelings. I knew I didn’t want to nurse a grudge and refuse to forgive. I knew that choosing to not forgive him would cost me a whole lot more than it would cost my ex-husband.

Bitterness is willfully choosing to hold on to hurt or angry feelings and forgiveness is willfully choosing to release it. Because while sometimes it can feel like we are unable to or justified in choosing not to forgive, sometimes we need to realize that we are simply unwilling to forgive. Just as loving someone is a choice, so is the act of forgiveness because that’s exactly what it is – an act, not a feeling.

I didn’t feel forgiving towards my ex-husband. You know what I really felt? I felt angry, betrayed, humiliated and like a used piece of trash just tossed to the wayside. I felt hurt that he had not taken his marriage vows as seriously as I took them and that I was now going to be a 21-year- old divorcee, used and abused, and without the life companion that I so deeply longed for.

However, feelings aside, I deeply wanted that healing from the Lord which would bring wholeness again. That redemption for my life and my story. I begged God to take my broken heart, to fill in the cracks and smooth them out again. To move towards having a healthy heart again, I knew it needed to start with forgiveness and releasing any potential of bitterness in my current situation. Though I didn’t feel it, I needed to act upon it.

Forgiveness is an act of surrender: surrendering to God’s will, God’s instruction, and God’s plan for redemption. We don’t have the ability in ourselves to forgive others but God can empower us to extend forgiveness, even in the hardest of situations where we are left feeling completely shipwrecked by the actions of another. Something we often can misunderstand is that forgiveness is not about the other person. It’s not agreeing or condoning what happened, it’s an acceptance of what has happened and then releasing it to the Lord in exchange of healing.

“But he was pierced for our transgressions, he was crushed for our iniquities; the punishment that brought us peace was upon him, and by his wounds, we are healed.” Isaiah 53:5

Friends, did you catch that? We all have great potential to want to hold on to our wounds inflicted upon us and let them fester…but we don’t have to. So rather than clinging to bitterness, offense and resentment, may we all learn to cling to the forgiveness and healing of our wounds which is found in Jesus. For by His wounds, we are healed. 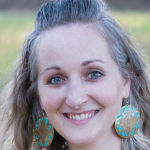 Kayla Anderson is married (for better or for worse) to the one who she knows without a doubt that God created her to be companions with.  Together they have four young children, Ezekiel, Asher, Ellery and Alder, and run a hand-crafted soap shop.  She is a stay-at-home, homeschooling mom and is in a season of learning how to gracefully be the central point and glue of their family.  Thank the Lord that she has Him to look to for wisdom, guidance and strength!  She loves reading in the quiet, early morning hours, decorating their sweet little home, writing has been part of her soul since she learned how to write letters, and her love of coffee runs deeper than her coffee pot.  You can find more from Kayla on her blog or Instagram.