Vegas. In the middle of the dry and the desolate, man has crafted a place where lights and golden-gilding cover luxurious arch ways ushering people into glossy portrayals of Dante’s nine circles.

In timeless, windowless, oxygen-infused casinos where multisensory stimulation waits around every corner, it is easy to forget both sun and moon, and just keep going, eyes wide, watching the continuous show. Until the sins everybody thought would stay there creep too close. On the night of October 1st, 2017 evil preformed its deadly dance and shot across the sky stealing the breath of over 50 people.

I want to ask “When will it stop?”But I find that to be an unanswerable question. For I have learned this truth—I live in a fallen world. 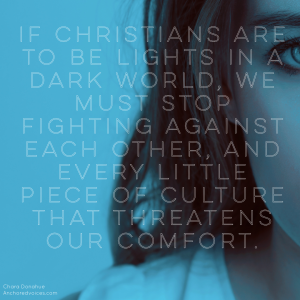 I was a senior in high school the year the Columbine Tragedy shocked the nation and infected people with a new brand of fear. It was like nothing I had seen before. I remember sitting by the television, still, shaken, and unsure. What? How? Why? I went to school the next day, finding myself cowering from the group that wore trench coats, and looking at my classmates with suspicion. It hadn’t required courage to walk into class the day before; this day it did. Still numb, I listened to my favorite teacher as she lamented the tragedy with tears and placed her hands protectively over her pregnant belly. She had to be asking herself, would she be willing to die for us?

Ten years later, I stepped up in front of my first class as a student-teacher, and I had to ask myself the same question. By this time, running students through lockdown drills was common practice, so I instructed them on how to hide in case of a gunman. I remember assessing how many students my body could shield. I am not naturally morbid, but as a teacher I needed to know how I would protect the students entrusted to me? Whether this is asked of our teachers or not, many consider this part of their job.

Before Columbine, it seemed that gang members were the gun carriers to be afraid of, terrorists seemed far away in other countries, and schools, churches, and movie theaters felt safe. And now, we risk developing a callous on society’s collective heart as we accept the mass shootings as an unavoidable reality. We clutch our chests, breathe out a helpless, “Again?!” Then we move on, because we just can’t handle the depth of the carnage of innocents gunned down.

The secluded white male young adult has become the face to fear, and he is everywhere. But again, in this label, I think we have it wrong. The problem isn’t a group, racism, or a religion. Nor is it gun control, mental health, or bad parents. There is chaos created by these things, but they are just symptoms of the deeper problem: evil. A problem too big for humans to address. This is why we feel so helpless to make it stop.

I hope for legislation that might actually be productive, but I won’t be writing laws anytime soon. I will vote, but I will also do my best to make the most of my time. I am determined stand against evil in whatever way it presents before me.

If Christians are to be lights in a dark world, we must stop fighting against each other, and every little piece of culture that threatens our comfort. We need to be who we are through Christ—righteous, more than conquerors, and carriers of the good news that offers a choice of who we will serve.

A good God or an evil world? On which side will we stand? 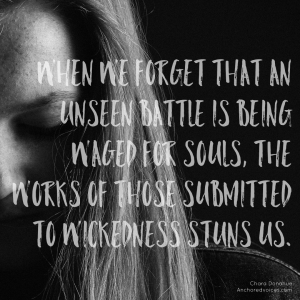 There is a war going on: For we do not wrestle against flesh and blood, but against the rulers, against the authorities, against the cosmic powers over this present darkness, against the spiritual forces of evil in the heavenly places.-Ephesians 6:12

When we forget that this unseen battle is being waged for souls, the works of those submitted to wickedness stuns us. When we are forced to remember that evil is real, let it remind us to fight harder, love deeper, and pray continually. I have no answer for “When will it stop?” I trust that victory will come, but I do not know when. In the mean time, I pray for those mourning, I refuse to harden my heart, and from the depth of my being I cry out “Have mercy Lord Jesus.”

Chara Donahue can often be found with her nose in a book and coffee in hand. She enjoys freelance writing, biblical counseling, and speaking to women when her four kids are out playing with dad. She holds a MSEd from Corban University and is passionate about seeing people set free through God’s truths. She is a regular contributor at iBelieve and her words have appeared at Christianity Today’s Women Leaders,(in)courage, Patheos, and The Huffington Post. She longs to be a voice that says, “Hey we are in this together, and there is room for us all.” You can find more from Chara at One Anchored Voice, on Facebook, and on Twitter.