Snuggled in my bed, surrounded by the soft comfort of an old down blanket, I stared at my phone watching the playback of a month old live-stream from Inglewood Baptist Church.

My Great Uncle Don Jones and his friend (another retired missionary), in a beautiful crescendo, gloriously sang the words: 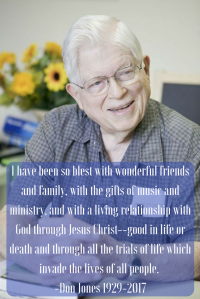 Earlier that day my Great Uncle stepped into that life forevermore; for him death is no more. He is in the presence of the Savior to which he dedicated his life, and for him there could be no better day. Those of us left behind feel the pain of loss; for him there is no more pain. I am so thankful for the prayers he prayed for me, and the support he gave me in the ministry I have had the privilege of being involved in. My thoughts of him that night were tainted with grief, yet sweet and hopeful for his new home. As my eyes became heavy with slumber, my last thoughts settled on, “What a well lived life.”

He was 88 and was still teaching, singing, and serving others because of the love first given to him by Jesus. Prayers swelled in my heart to my Savior, that I too would live a life with that type of legacy. Loving God and loving people, knowing God and making Him known, a legacy of Philippians 1:21, “To live is Christ, to die is gain.”

His wife Nita was likewise filled with bold gentleness, and together they were missionaries in South Korea for 36 years as they raised their two children. I still remember her hugs… for some reason that is my clearest memory of her. It wasn’t really the hug itself but the feeling of deep comfort wrapped within them. She died in 2004, but the love they shared didn’t. You still saw and felt it when he spoke of her. 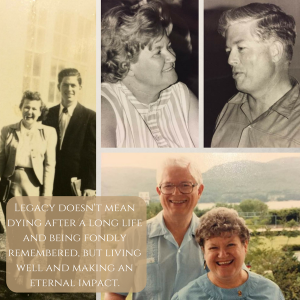 I remember sitting with my grandmother and my mother huddled around our giant box of a TV watching the 1988 Seoul Olympics where Don and Nita were serving as translators. Every time their event would come on someone would yell, “Hit the record button!” as we tried to catch a glimpse of our family members on the sides of the diving pools of the world-wide competition. With such a small view of his life and his impact for God’s kingdom, I naively thought this was the coolest thing about my Uncle Don. I shrugged my shoulders at the work he was doing in Korea, that he held a Masters and a PhD, and that he had walked faithfully with Jesus since childhood. The Olympics, that was what impressed 6-year-old me. But what sticks with me now, and will remain until my own walk into eternity, is the race of faith he ran.

I look to them, this generation that went before and I dream for my children and their children. When we lose a family member who reaches the end having truly glorified Christ, we are compelled to ask: “How did they get there, and how can I do the same?” My Great Uncle and Aunt did it, my Grandparents did it, and I want to do it. Legacy doesn’t mean dying after a long life and being fondly remembered, but living well and making an eternal impact.

Now he sings a new song, one too beautiful for me to yet comprehend; it harmonizes with what his life sung of the grace and glory of God.

Readers, This month we will be diving into thoughts on legacy. Who has left a lasting mark on your life in a way you would like to do for others? Join the conversation and let us know in the comments. 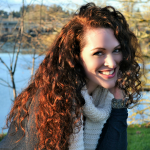 Chara Donahue enjoys freelance writing, Biblical counseling, and speaking to women when her four kids are out playing with dad. She holds a MSEd from Corban University and is passionate about seeing people set free through God’s truths. She is a regular contributor at Portland Moms Blog and her words have appeared at (in)courage, Christianity Today: Women Leaders, and The Huffington Post. She longs to be a voice that says, “Hey we are in this together, and there is room for us all.” You can find more from Chara at One Anchored Voice, on Facebook, and on Twitter.