I feel a pang of anger each time I see a Facebook post or Internet meme stating that abortion is murder. Not because I disagree. I do not. I am angry, because I didn’t know until it was too late.

The doctors and nurses at the clinic where my abortion was performed didn’t share that information with me.

I’m angry that they didn’t provide me with choices or give me the opportunity to make an informed decision.

I’m angry that they didn’t ask how I got pregnant. I was raped, but that didn’t concern them.

I am angry that the pro-life movement spends so much time focusing on the babies that they often forget the women (or quite often young girls) who have been traumatized by the abortion industry.

I’ m angry that the supposed pro-choice movement in this country often denies the facts from women facing crisis pregnancies.

I believed the lie that an abortion was the only answer to a crisis pregnancy.

I could stay angry, but I feel God’s Spirit remind me that anger and vengeance are not mine. What is mine is forgiveness. And when I focus on God’s forgiveness, knowing He understands my regret and desires to heal my broken heart, peace begins to grow.

This is when I realize that God hasn’t called me to try to change the hearts and minds of those who are pro-choice or to condemn the methods of those who are pro-life. What God calls me to do is to bring His message of mercy and forgiveness to women. Women, like me, who have endured the trauma of abortion and sometimes feel like there will never be rest for their soul.

Peace is offered in Jesus, who died to pay for all our sins, including aborting the lives of our children. He will forgive all. His forgiveness binds the broken heart. 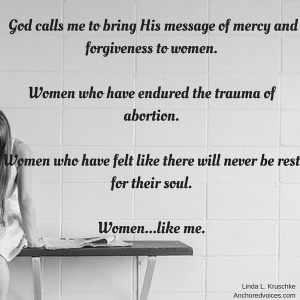 Do you live now with regret and heartache over the child you aborted? Do you struggle with depression and suicidal thoughts but don’t know why because you’ve buried the guilt over your abortion so deep you aren’t even consciously aware of it? Do you long to be closer to God but somehow feel that you will never be good enough for Him?

Dear one, you are not alone and you are loved. You are not the mistakes you have made and the wrongs you have done. You are loved by God and He desires to heal your deepest pain and hurt, to bring you forgiveness and peace. You only need to lay this burden—a burden that is much too heavy for you to bear alone—at the feet of Jesus. His truth and love will set you free to live in His peace.

Readers, If you have experienced the pain of abortion. We are praying that you will find the growing peace that Linda has experienced through Christ. He hides us in His righteousness and sees our failings no more. There is great freedom and hope in Jesus.

Linda L. Kruschke is a wife, mother of one young adult, sister, aunt, friend, recovering lawyer, and follower of Jesus. She is the author of two poetry books — Light in My Darkness and Rejoice! Rejoice! — both available on Amazon.com. She blogs at Another Fearless Year  about faith, life, and whatever else comes to mind. In her spare time she enjoys reading, listening to music, traveling, playing ball with her dog, and cooking delicious meals for her family. You can find her on Twitter and Facebook.

An earlier version of this post first appeared at Another Fearless Year.